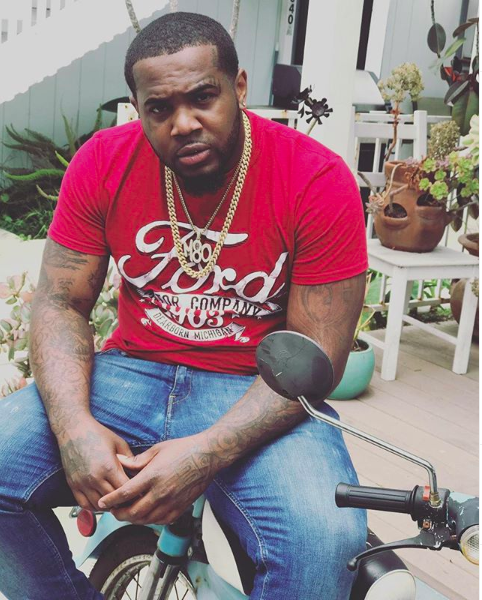 Up Close and Personal

Trap Kelly (aka M80), a rising sensation who croons like Chris Brown and can spit with the best of them, was born and raised as Nadir Wilkes in the rough neighborhoods of Paterson, New Jersey, now the second largest concentration of Arab immigrants in the U.S. The twenty-six year old sports a .38 Special tattoo over the entirety of his hand and music notes inked above one eyebrow – only two of many tattoos that cover most of his visible skin.

You can usually find a medium built, muscular Kelly with different hairstyles from mohawks to cornrows, a gold grill, designer high tops, and thick chains draping from his tatted neck. Two diamond encrusted emblems scream from his chest – “M80” and “ZooGang”. His appearance demands attention but his demeanor can be quite different.

Today there was no persona, just a down to earth guy with a big smile welcoming me to his hood in the heart of New Jersey.

Dressed in grey sweat pants and a black t-shirt, he led a quick tour of the modest and sparsely furnished town home he shares with two other artists. He stops at what he calls the “booth”, a small room with ceilings and walls covered in acoustic foam, a futon, and a microphone. With his first mixtape releasing later this year, he recalls days in his childhood when he wanted to be a rap artist. With a voice made for radio, low and buttery, he laughed, almost giggled, as he recalled his first lyrics at the age of nine, “I be doing things my way, you can catch me doing sixty on the highway.” After learning that sixty wasn’t fast, or cool, his short-lived dream and the sign on his bedroom door, Nadir’s Studio, disappeared. Years later he found himself behind bars writing poetry to a girlfriend on the outside. His cellmates encouraged him to use his poetry as lyrics and the long forgotten and fleeting dreams of rapping were reborn.

Kelly rolls a blunt as some of his newer beats fill the room. He didn’t know the title of the blog is Let’s be Blunt but it was the perfect time to start our conversation.

A Kid in the Projects

Stoic as he speaks about his childhood, he recalls memories in the Paterson projects. “You got a whole bunch of kids running around together with lots of freedom. I never had to be out in the streets when I was younger…” Kelly’s mom was sixteen and his father seventeen when he was born. His mother raised him and he says, “I’m cool with my dad. I feel like my pops probably did what he could, I guess.”

He talks about two strong male influences in his life and points to “Kent” tatted on his neck. At age six, Kelly met his grandfather, Kent, who lived in a big home with muscular white friends. He covered a big smile with the back of his hand. “That’s when I fell in love with him.” He later learned it was a halfway house where his grandfather lived after serving twenty years. Kelly suffered a devastating loss at age 13, when Kent died.

Casper, his other Grandfather, was in his life since birth but passed away four years ago. He smiled and held the blunt away from his face. “He wasn’t an old grandpa. He was young as hell…” His smile faded, he took a deep breath, and his voice tapered off. “I loved him to death. I almost died when he died.”

The tight relationship with his grandfathers prepared him for early parenting. Kelly’s face softens with an ear-to-ear grin when he thinks of his two sons under the age of five and eight-year-old daughter. “They love me. Hell yeah, I’m their daddy.” His discipline style is firm and he communicates with his children like adults, which he attributes to their constant growth. Although Kelly didn’t get on a plane until he was twenty-four, the kids have already been to Disney. He shakes his head as he remembers on the third day at Disney his son just wanted to go see Grandma. Like every parent, Kelly wants his children to have more than he did, but he wants them to appreciate it.

At the ripe age of nine, Kelly encountered his first experience with cannabis. He rode his bike outside the housing complex when a neighbor walked by and Kelly asked, “Yo, what’s up? What are you doin’?” He said he was going to score weed. Kelly was shocked at his honesty. He knew what it was but was never around it. He experimented with cigarettes at the time so he asked, “Can I smoke with you?” The neighbor responded affirmative and young Kelly couldn’t believe his ears.

When the neighbor returned, he walked past Kelly, who now sat on the stairs. Kelly didn’t say anything but the neighbor turned around and asked, “Hey, little boy, you coming?” Kelly ran up the stairs and thought, “I’m about to smoke some weed. Some cool shit is about to happen.”

Young Kelly hit the blunt twice. “I was so fucking high. I had that laugh that you can’t hear because you’re laughing so hard.” He shrugged his shoulders up and down and rocked back and forth with a silent wide-open mouth. All of a sudden, they heard his mother call his name outside the complex and knock on the door; he was told to hide in the bedroom with his neighbor’s older girlfriend. “We were looking in each other’s eyes and shit. I don’t know, it was like a movie. I wondered if she liked me.” He chuckles. “Now that I look back, I don’t think she probably did.” Kelly eventually slipped by his mom, who was doing someone’s hair, and made it to the safety of his bed where he slept off his buzz and didn’t revisit cannabis again for years.

Kelly’s first tattoo, concealable under a tank top on his shoulder blade, came at fourteen without parental consent. He confided in his mom’s friend about the new addition and within minutes she turned around and ratted him out. His arms flail in the air as he speaks about his mother’s reaction and demand to have it removed. When she saw the tattoo, she asked, “What the fuck is that?” Her eyes watered when he explained it was her initials. “After that, I just went crazy because I realized once you get one, nobody can take it from you.” He doesn’t love every tattoo he has, but it doesn’t bother him because they all have meaning.

At seventeen, he faced charges as an adult for armed robbery. The ten-year prison sentence haunted him, but what could have been the worst predicament of his lifetime may have given him a career.

When Kelly was young and needed money, he did what he could to get it without stealing from friends or acquaintances. It caught up to him and he fought against being tried as an adult to avoid ten-years in prison. Kelly was sentenced to four years as a juvenile, for armed robbery and got out on parole after two. He received his GED in the youth house and later earned a certificate in manufacturing, technology, and welding. Kelly spent a short time working for BMW until he finally took the advice from his cellmates to use his poetry for lyrics.

Kelly’s mother played DMX, Erika Badu, Mary J Blige and the Isley Brothers while getting ready for the club when he was younger. “That’s my favorite artist, DMX. That’s what made me like music.” DMX is still Kelly’s favorite artist; it’s unclear if it’s for talent or nostalgia. With his first mixtape releasing soon, the only way he describes his sound is “Trap Kelly.” He focuses on his own vibe which lands anywhere from rap to hip hop to whatever Kelly feels at the moment. “I listen to music, I just don’t listen to be inspired.” Over the last year or so, Kelly has attracted a large online fan base. “If you want to listen to me, it’s got to be by choice or you stumble on my stuff on Soundcloud and decide to like it.”

Kelly has the support of his New Jersey music crew, Zoo Gang, represented by one of the diamond emblems usually around his neck and led by Fetty Wap, a recent phenomenon in the rap world. “Wap” and Kelly embarked on their music career together before Wap had his first major hit, “Trap Queen” in 2014. Trap Queen is a love song within the urban drug culture. M80, Kelly’s rap alias, is featured in several Fetty Wap tracks and Wap included him in his Welcome to the Zoo Tour. There were plenty of major artists that would have paid to be on the tour but Wap said, “nah, I want my niggas to be on that shit, man.”

Kelly’s most recent project includes his close friend, Jon Gornbein, who moved to San Diego from Michigan and founded a company, KINDdistCo, within the cannabis industry last year. Gornbein has worked with musicians such as Kid Rock, and owns the music label, Protekted. Kelly describes Jon as humble and positive; the type of people he likes. Gornbein said, “I wanted to collaborate; his music and our edible are explosive like an M80.” Gornbein created an edible named after Kelly’s rap alias. The “M80s” gummy is twenty micro-dosed pieces containing five milligrams of THC each in a hologram-branded tin. A powerful buzz if you eat all at once, however, most people take one or two for a holistic approach to pain or to relax and socialize after a long day of work, much like a glass of wine. The gummies hit the cannabis scene in mid-2017 and are carried and sought after in many California dispensaries up and down the coast. Handcrafted, the soft jelly gummy formula comes in cinnamon, watermelon, pineapple, and red velvet. Kelly hopes to release fruit punch in the future and talks about the business world with gratitude. “You learn a lot about people and it’s a lot of footwork but you’re getting high every step of the way. You go to a meeting and you end up getting high.” He lowers his head, looks up, and covers his smile. “That’s boss shit.”

Although Kelly is only twenty-six years old, his recollection of life experiences is beyond his years. He’s considerate, focused, and, most of all, humble. You can find him on Instagram as @rgfm80 where he posts about the hustle, his artistic friends, and gratitude for where he is in life. The common theme in Trap Kelly’s life is friends and family; they are his main concern. When asked where he’ll be in ten years, he pauses for a minute and tugs his goatee. He’s stumped, he licks his lips while he thinks about the final question and responds with conviction, “In ten years, I don’t know where I’ll be, I just want my family, my kids, and my friends to be straight. It’s one thing to buy things for yourself but when you’re able to do that for others, that’s when you really did it.”

Kelly works hard in the studio, on videos for upcoming tracks, with his fans on social media, and marketing M80 Cannabis Gummies nationwide. When it comes to a back-up plan, Kelly says, “I got no choice. I gotta make it.” Gotta Make It is one of his tracks on SoundCloud. As witness to his focus and ambition, there’s no doubt he is all in.